Hey let me introduce myself, my name is Alfiolita Widya Safitri and I am student at Padjajaran University, Faculty of Communication Science for public relation major. As a particularly role, the 7th semester students is required to take the internship program. It is the part of requirements which students have to through for a degree.

Thus, I have decided to take an internship in BKN and it reminds me when the first time I went there, it was on August 15th that I met with Mrs. Dini, who explained some rules which I have to fill before started the internship. During through it, there was so many new things and experience, in which I was met with some new friends, those are namely Ayu from UNPAS, Livia (UNPAD), Talita, Tata, Fisca, April, and Vera.

On my first week there, one of the sub division of public relation bureau, namely as the sub division of media relation gave me a chance to being notes writer of particularly event and asking me to do media monitoring either by online or newspaper. Then in the secondly week, I took the part of protocol sub division by confirming BKN officials schedules, known as JPT Madya & Pratama. By doing it, I have learnt that it is not quite easy to be a governmental protocol.

The other experience that I through with sub division of publication and documentation, in which asked me to created the magazine wall and took a report of BKN events. I was given a chance to being a photographer and it was my new something that I could learn. It was happily to be documentary in one of government institution.

Actually I felt nervous by that time, but the other side, I was so grateful for all the experiences above. Even though I personally mind that I am still amateur but I have a marvelous chance to do many things along in BKN and it all is be my memory that I will not forget. 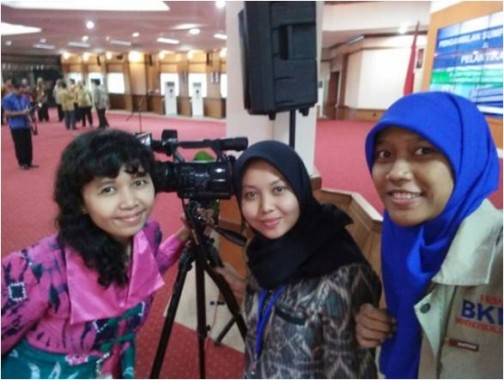